A while back the idea of lists hit social media marketing – apparently people luuuurve lists of things, so the marketing ‘experts’ told us all to compile lists of ‘stuff’ for our blog posts, because this would generate lots of traffic.

I’ve been watching the next twist – extending the social engineering by publishing a list, promoting it on social media and insisting that number so and so is the ‘best’.

Of course the most interesting one is not the first one you’ll see: 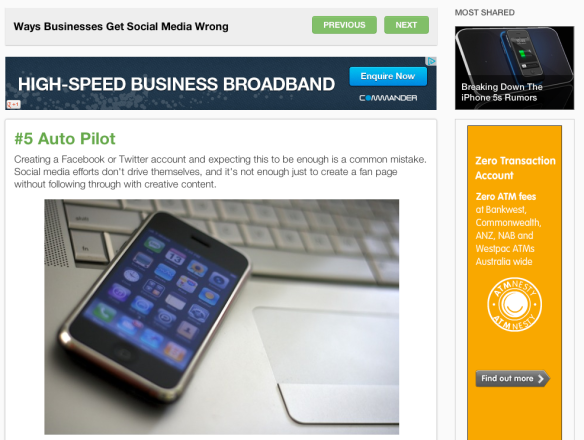 There are 15 items, one per page, and so you’ll need to click through 15 to 5 before you find the mistake that is soooo common. The clue of course lies with all the ads on the page – 10 clicks means those ads have all been served 10 times, making the web site statistics look good and improving the chance a visitor will click an ad.

Creating a Facebook or Twitter account and expecting this to be enough is a common mistake. Social media efforts don’t drive themselves, and it’s not enough just to create a fan page without following through with creative content.

The blog publisher is not even creating the content, it’s all lifted from other places.

There was an interesting piece by Ryan Holiday on betabeat.com a few weeks ago, where he set out to illustrate the lows the blog publishing world has plumbed in order to boost page views.

Ryan demonstrates techniques commonly used by the major online media outlets to artificially increase their traffic, and concludes that online media today is a racket:

A racket where investors and media moguls make millions, where individual bloggers driven by pageview bonuses exaggerate and distort the news for their share of the bounty, where promoters using tactics like mine can generate massive publicity for free, and readers–having no idea that this is occurring–click away, think they are receiving “news.”

I vividly recall establishing our online news content company in 2000, and being told by the pundits of the day that nobody would pay for online content – advice we promptly disproved. Our customers *did* pay us to provide them with highly relevant, good quality content. They voted with their feet, and flocked to our web site.  We were successful because at the time we were pretty much the only media outlet providing our type of content to our audience.

There is a new reality today I think – there’s only so much news, and only so many potential customers, and an over-crowded publisher market. The maths don’t work.

The competition for eyeballs is so fierce, many online media outlets seem to have thrown any notion of content quality out the window as they chase a finite audience in competition with a million other media businesses.