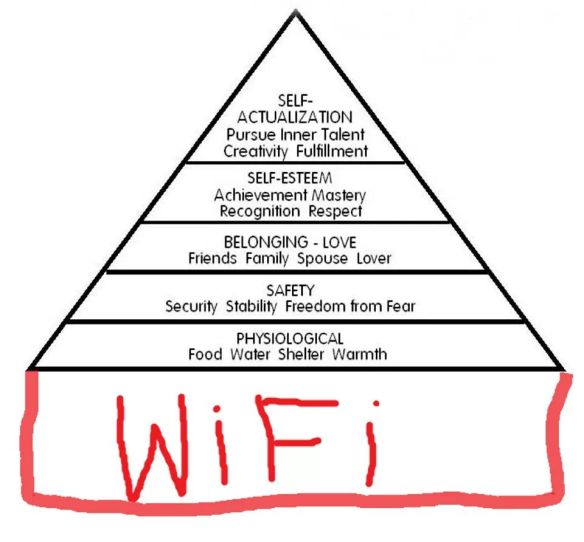 The screams from the furthest reaches of the house are muted at first, then build to a crescendo, and finally various household members’ heads pop around my study door – “Daaaaadd, the internet’s not working!”. Yup, you can tell the wifi is down in our house. Without wanting to create a shopping list for our neighbourhood burglars, at any given time there are upwards of twenty or more devices connected to our wifi networking including computers, phones, iPads, Apple TVs and televisions. There isn’t a single thing connected via ethernet wires anymore, just lots of gadgets floating on the Boyd-Eedle internet cloud. And boy does the world come to an end when that cloud evaporates in a puff of vapour.

Let’s take a quick inventory: me glued to my machine working; my loving partner plugging away on her book; our eldest simultaneously communing with her six best friends on social media whilst researching a homework task; our middle child wreaking havoc with his closest mate on Grand Theft Auto, every move planned while chatting over Facetime on his iPad; and finally the youngest trawling through an apparently endless chain of Hi-5 videos on YouTube – she’s a big fan of the Spanish-dubbed ones. Personally I find it hilarious watching Charlie and Nathan mouth ‘Hello’ on screen but say ‘Hola’.

Earlier this month we took to the road and stayed a week and a half in a holiday rental up in the high country, near one of the ski resorts. There was a complete absence of mobile phone reception inside the house, although if you wandered up the back garden, stood on one foot, and held your phone at a 22.45 degree angle to the event horizon one bar of coverage was possible, just enough to send a text, barely enough to pull down email headers, and definitely nowhere near sufficient to enable a wifi hotspot.

When we first arrived the kids gave me the impression we had just detoured into the depths of Mount Doom. I took pleasure from previous visitors’ entries in the guest book bemoaning the absence of internet access, my favourite was annotated with the scrawled riposte from the house’s owner “get over it”. My sentiments exactly, although my inability to read and deal with email led to reserving a day on our return to connected civilisation to chew through and handle the 150 emails that had accumulated in my inbox.

On the bright side, I read six books in ten days; played board games with my children; sat down to a home cooked meal every night with more people than just myself for company at the dinner table; and our son who brought a couple of teen friends, embarked on a backyard cricket competition worthy of Wide World of Sports coverage. Consequently  nobody had a chance to exceed their mobile data cap, a frequent and unwelcome occurrence in chez Boyd-Eedle – damn expensive too, the phone companies have finally given up taking us to the cleaners on wired internet data and focussed their rheumy eyes on the next price gouging frontier – mobile.

Between our ADSL and cable internet connections we have I think around 700Gb of data a month available, and despite Netflix being the television channel of choice, we never exceed the limit, even with my Orange is the New Black marathons. Now the telco parasites have latched onto wireless data like those annoying little ball of fur terriers incessantly humping your trouser leg, impossible to shake them loose. So an $80 a month mobile plan mystically morphs into $200 because Telstra charges $15 for a 1Gb data pack which, if they charged the same rate for our ADSL and cable internet, would lead to a bill of $10,500 a month by my calculations.

Arriving home from our holiday my children delivered their best impression of a dehydrated man crawling through sand towards a desert oasis, or maybe more suitably in my childrens’ lexicon, Kim Kardashian scrabbling towards the last TV camera in the world, as their various gadgets booted up and they were once again smothered in the comforting embrace of our home wifi network.

Oh and did I mention the kicker – no television signal either in our Faraday cage holiday hideaway. Just videos and DVDs. Note to self: I never ever want to see Disney’s Cinderella ever again.